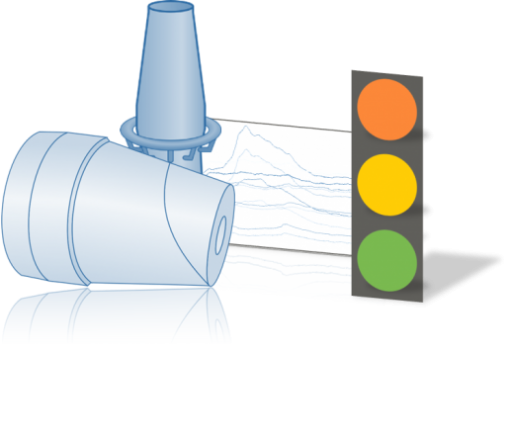 The organisers of the webinar will declare guidelines on adherence to competition-law regulation and will take care of their compliance.

Although BF operators and R&D institutes have done a lot of effort analysing the tuyere damages and trying to find the reasons for those incidents there are still major gaps what to do or avoid for lowering tuyere damage incidents at BF operation. The main difficulty up to now was the “singular” character of the incidents due to local thermal overload and the massive destruction effect within short time, which has led to an acceptance of those damages as usual in the past. Consequently, no operational tools are available, yet, to solve the problem.

The RFCS DEPREX research project aims to develop an operational online control system for early detection and prevention of tuyere damaging conditions in order to decrease the frequency of unplanned BF stoppages for significant reduction of energy consumption and costs in BF operation.

The damage of a blast furnace tuyere is an unpredictable incident in blast furnace operation. Each single tuyere damage effect a stoppage of the whole blast furnace of about two hours up to eight hours for repair. Although, the hot blast is stopped and no hot metal is produced, coke is consumed and additional coke has to be charged. Energy is spent without any benefit.

The additional energy caused by a BF stoppage due to tuyere damage has been estimated roughly to about 1.600 TJ each year for German BF only. The estimation implied a damage frequency of 45 damages per blast furnace and year. Assuming the same tuyere damage frequency for blast furnaces in EU 28 the useless energy consumption results of more than 6.000 TJ. Doubling the extension of BF tuyere life time gives a benefit of 3000 TJ. Therefore reduction of tuyere damage frequency is an important aim to the sustainable energy use and reduction of costs strengthening the competitiveness of the European iron and steel industry.

The aim of the planned RFCS project is the development of an online BF tuyere damage risk assessment system for early detection and prevention of tuyere damaging conditions in order to decrease the frequency of unplanned BF stoppages. The decreasing number of unplanned blast furnace stoppages due to tuyere damages enables a significant reduction of energy consumption and costs in blast furnace operation. Furthermore, it decreases the risk for the occupational health due to e. g. contact of blast furnace staff with toxic CO containing gas and hot metal during exchange of damaged tuyeres. Therefore, each prevented tuyere damage helps to increase safety of BF staff.

Additional knowledge about BF tuyere damage mechanism and weak spots / areas at tuyeres is generated by advanced analysis of the degradation of BF tuyere material properties over the life time of such components. Up to now metallurgical and thermo chemical investigations have only been carried out at damaged tuyeres. The chronology of material properties of BF tuyeres “from cradle to grave” has never been investigated before and is expected to give important additional information. The additional knowledge about tuyere damaging mechanisms is one key component in the development of the new online BF tuyere damage risk assessment system.

This video can only be viewed with Chrome or Opera.

The data and information generated with the new operational BF tuyere monitoring systems (MT & OMS) together with operational data of the blast furnace are concluded, analysed and processed in the model-based online tuyere damage risk assessment system. The aim is an early detection and prevention of BF tuyere damaging conditions with appropriate counteractions of the BF operators.

The basic idea of this new online BF tuyere damage risk assessment system is, first, to provide new operational BF tuyere monitoring systems improving and combing the prototype measuring tuyeres and the tuyere optical control system established in a previous project. Second, the measuring data will be correlated with operational data of the blast furnace. The results will be exploited for industrial online application in a model based online BF tuyere damage risk assessment system. The new BF tuyere damage protection system is composed of the following modules/ components:

The overall aim of the DEPREX RFCS research project is the early detection and prevention of tuyere damaging conditions for the extension of BF tuyere life time. The decrease of the frequency of unplanned blast furnace stoppages due to tuyere damages effect a significant reduction of energy consumption and costs in blast furnace operation, contributing to the RFCS programme objectives and strengthening the competition of ironmaking in Europe. 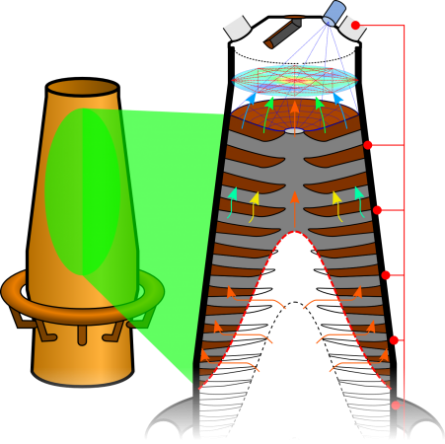 The decreasing and fluctuating quality of raw materials and the aim to maximise PCI and decrease coke rates force European blast furnaces to operate closer to operational limits. At same time productivity and efficiency must be raised to survive in global competition. High stack permeability and stable gas distribution become most important.
However, the analysis and control of the stack processes is difficult: Hundreds of  measurement values are available nowadays, but they are distributed around the blast furnace and just show indirect “fingerprints” from outside instead of the real internal process information needed (e.g. position of process zones).
New measurement techniques deliver very fast, full 2D information of the top (acoustical gas temperature, burden profile radar), but they are not sufficiently validated and not investigated by research. Instead, the operators are overcharged with even more separate measurement data. No overall process information is available to decide about control actions.
The main idea of StackMonitor is to establish a new hybrid approach of data processing which couples statistical and kinetic process models with several online measurements. This new approach will provide industrial benefit even beyond iron making, since several industrial processes suffer from the mismatch between the vast amount of measurement data and its poor exploitation.

To achieve this aim, StackMonitor establishes the innovative coupled CFD-DEM simulation to support online process monitoring and control, validated with comprehensive high temperature lab trials. Thus, for the first time the interrelations between solids and gas in the upper stack can realistically be described: The percolation, mixing and degradation of material during descent and the corresponding layer permeability.

Involved Partners in the reseach are

This project has received funding from the Research Fund for Coal and Steel under grant agreement No 709816.

The development of the online monitoring systems in StackMonitor will be achieved in four major steps which form the work packages in StackMonitor. An overview of the concept is illustrated in the following figure: